Theory in that sense I understand as a crucial possibility to connect a topic to a wider context. It broadens understanding. Depending on the subject of investigation literature should be picked that complements or confirms existing knowledge. Ankerpoints for design can be found in philosophy, art history, design theory, but also neuroscience or psychology. Social sciences that give cultural insights on historical developments are helpful as well. Looking into the current state of the art, as well as trends can also add a new perspective on the topic.

The aim is to base the visual experiments on findings from other experts, who offer a differentiated view and approach. A theoretical reflection should be published as a document that comes along with visual design explorations. It can also include image discussions or debate design solutions critically. 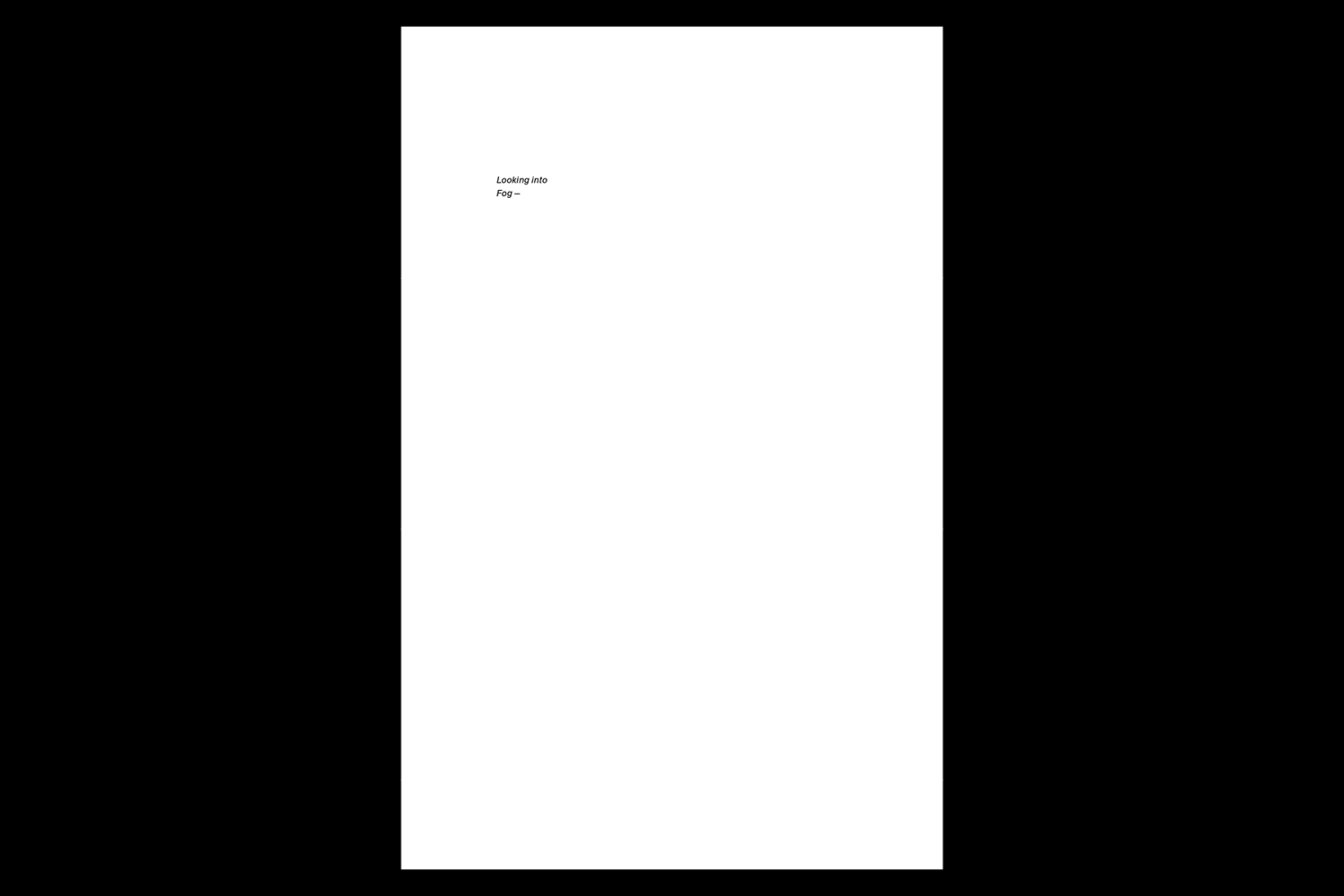 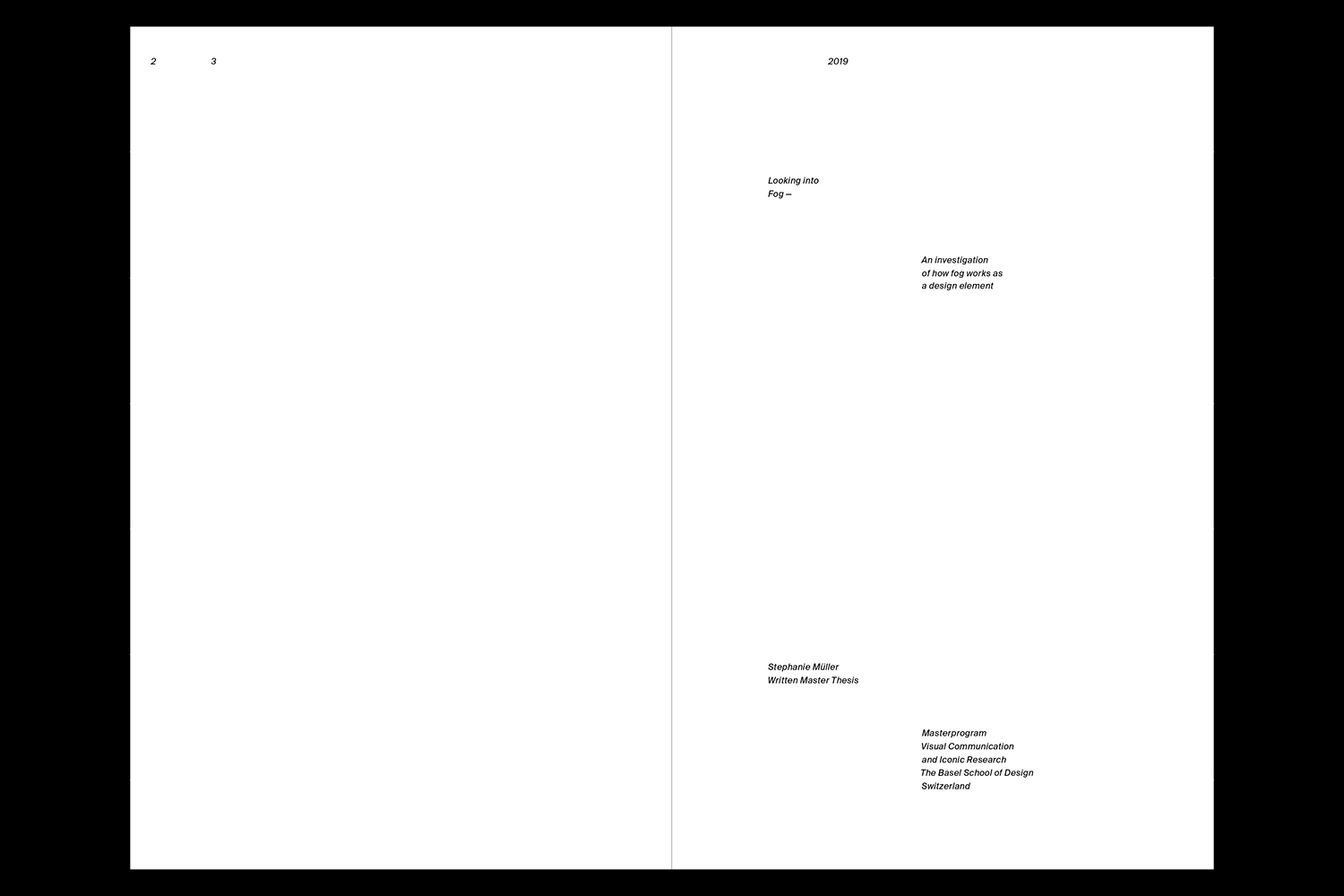 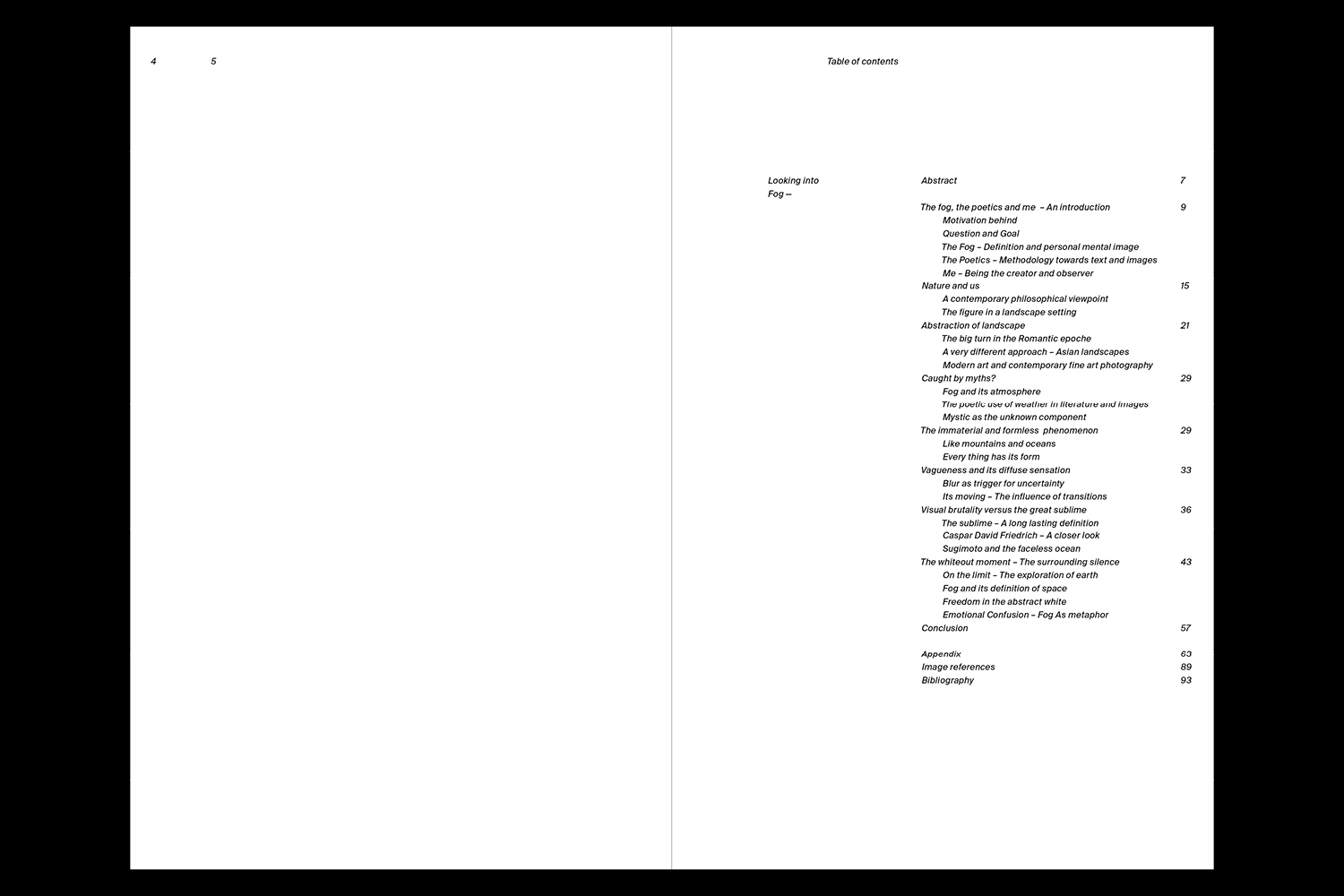 Project: Looking into Fog
– An investigation of how fog works as a design element
By: Stephanie Müller
Year: 2019

Abstract: To observe fog as a weather condition in order to translate its characteristics into a visual language leads to a discussion about the relationship between humankind and nature and how nature is defined that one is able to study it as a subject. How nature is perceived manifests in the depiction of landscape. This thesis project was about exploring and finding different ways to approach the phenomenon of fog within a visual context.

In the romantic epoch, the scientific rooted observation of clouds started and brought up today’s basic definition of cloud categories. At the same time, many artists began to look at the sky more intensively to study cloud formation, movement, and light. The romantic paintings were used as a reference to compare them not only with own created image material but also to juxtapose them with Chinese landscape paintings and Japanese woodcuts. Including another perspective than the Western European one lead to considerations of seeing nature as a living being, and therefore, fog became an actor that is at the same time moving and also breathing.

In the end, the reflection about fog and its use as a design element guides to image creations that used different kinds of techniques, such as photography and graphics, and tried to reflect on the use of blur, opacity, layering and noise. Furthermore, it reflected on how these images are perceived, seeing them as landscapes and spaces that require bodily empathy. 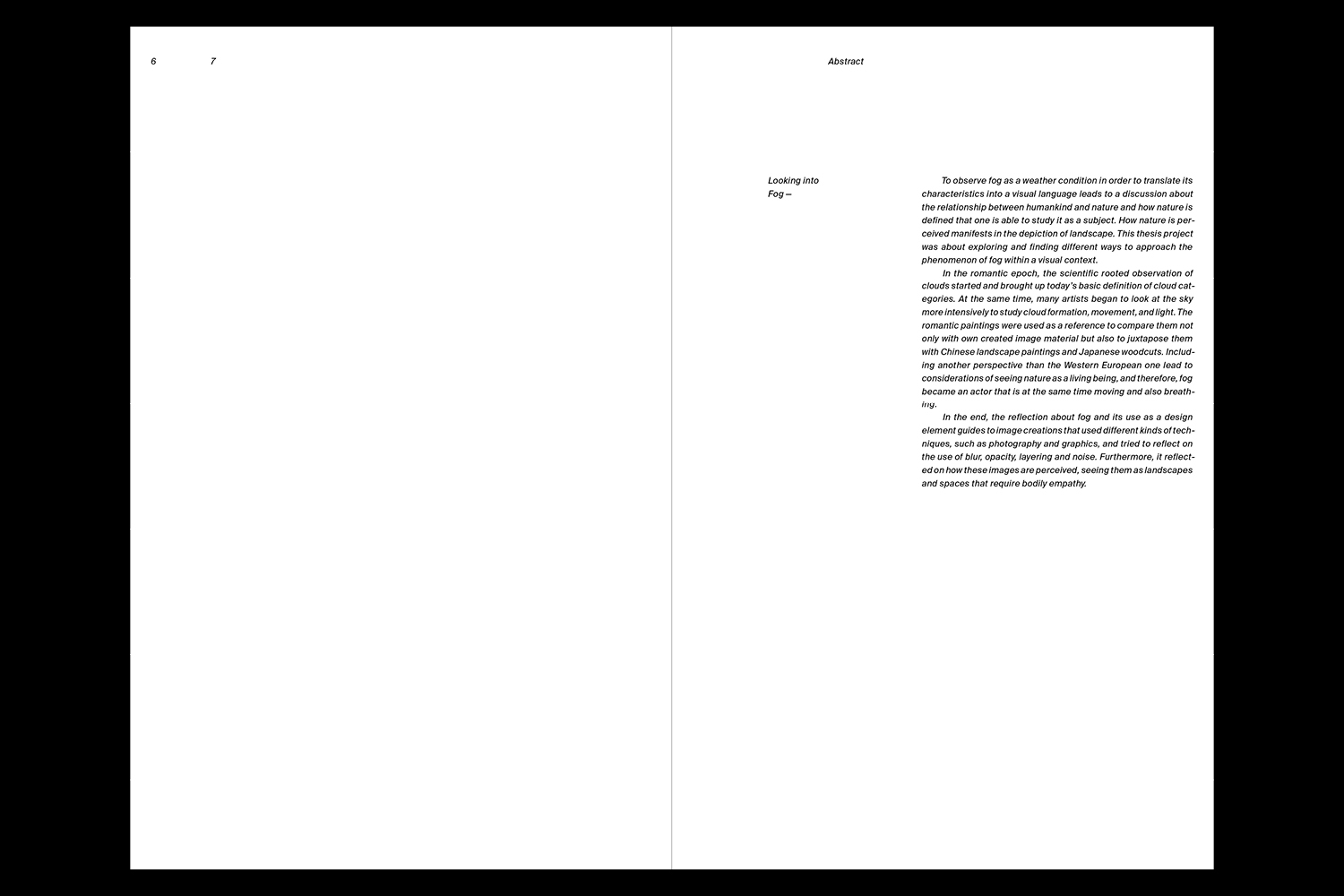 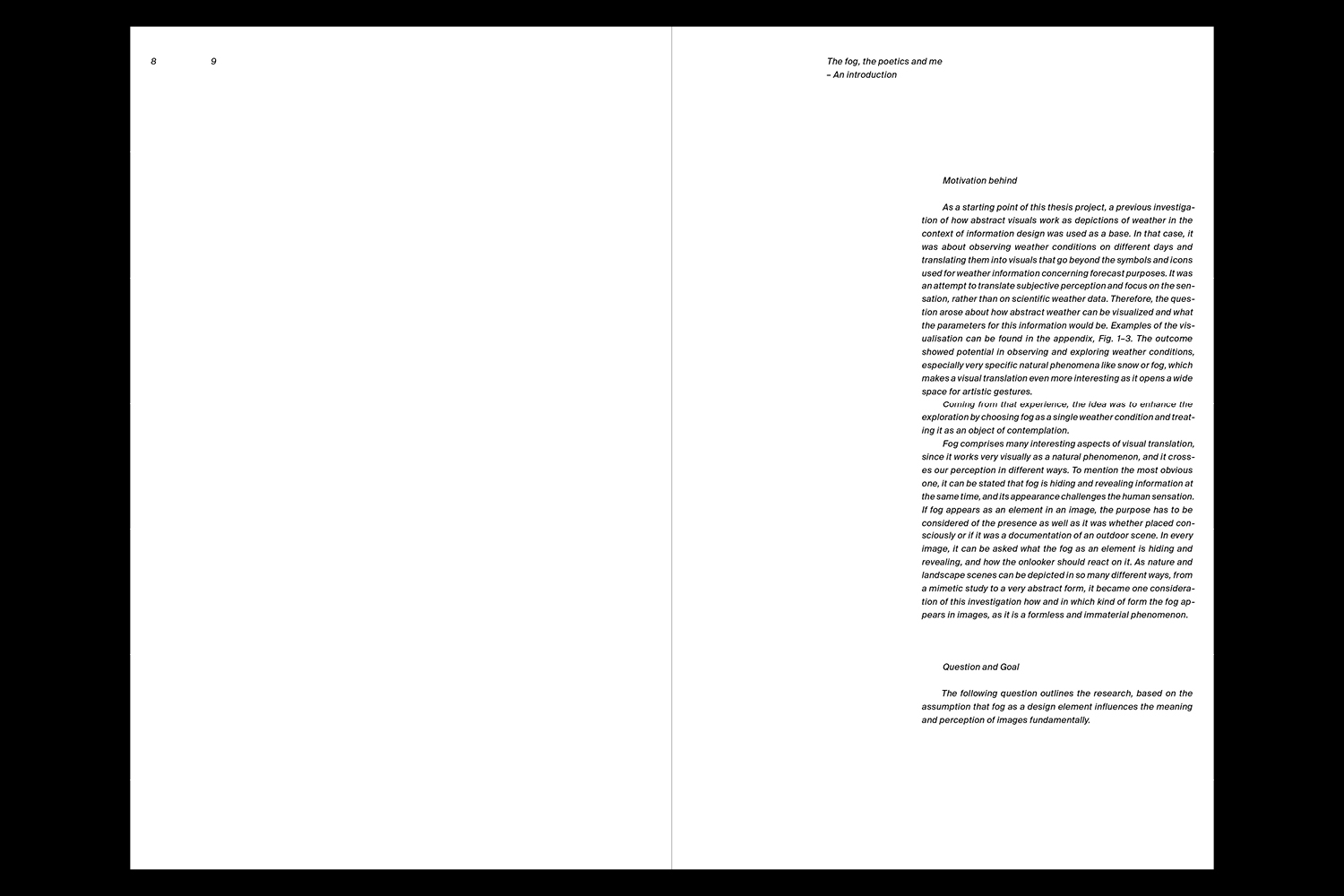 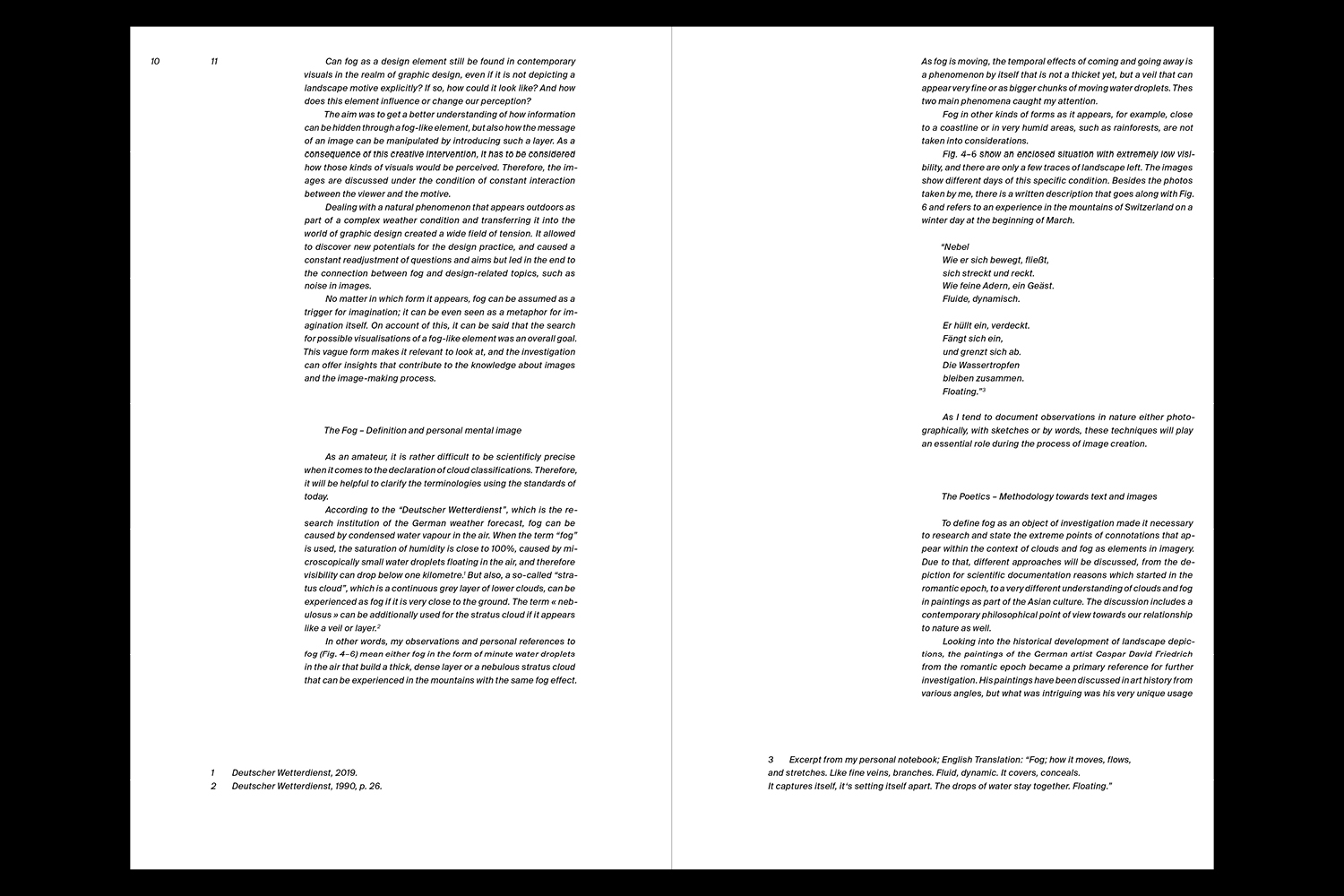 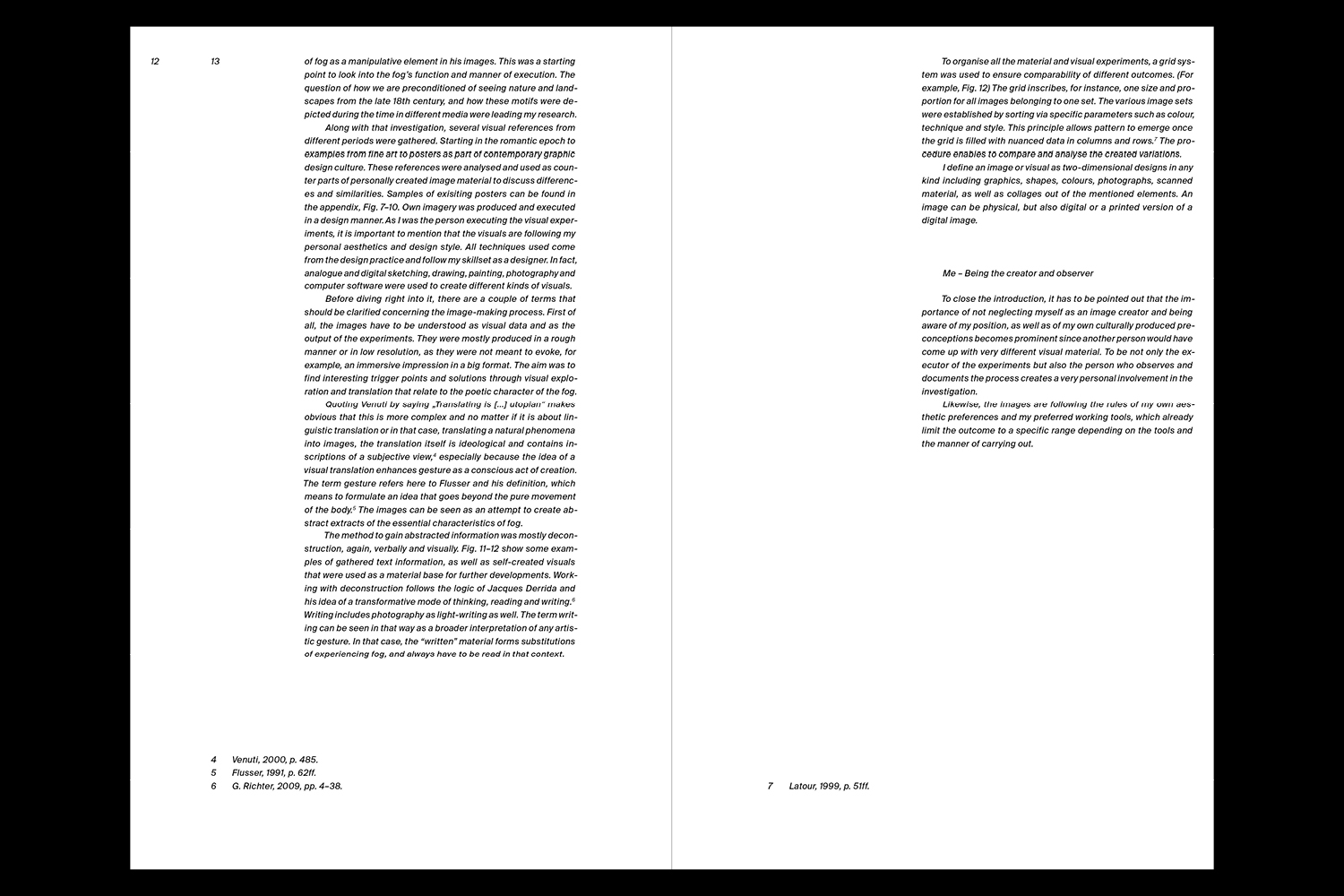 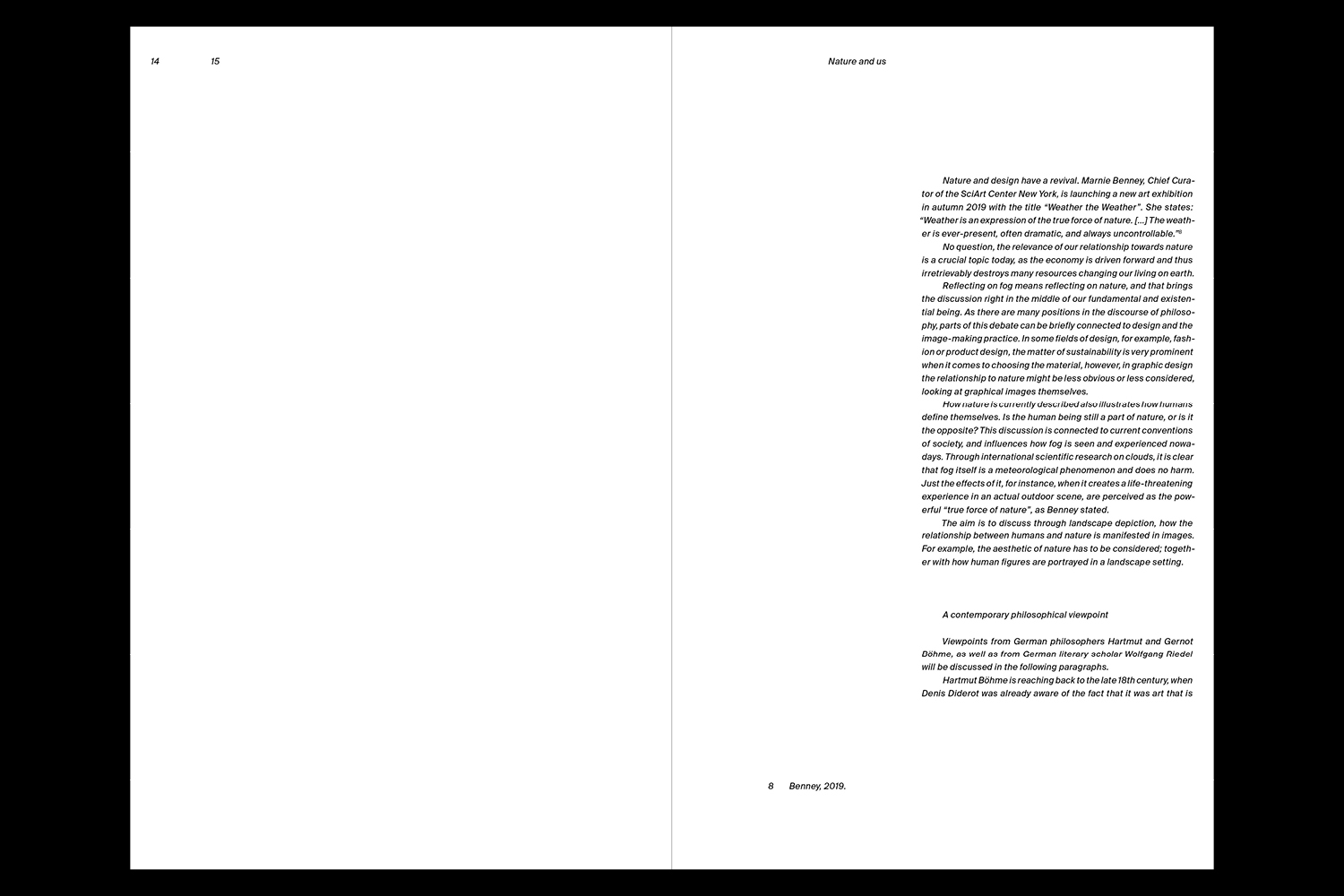 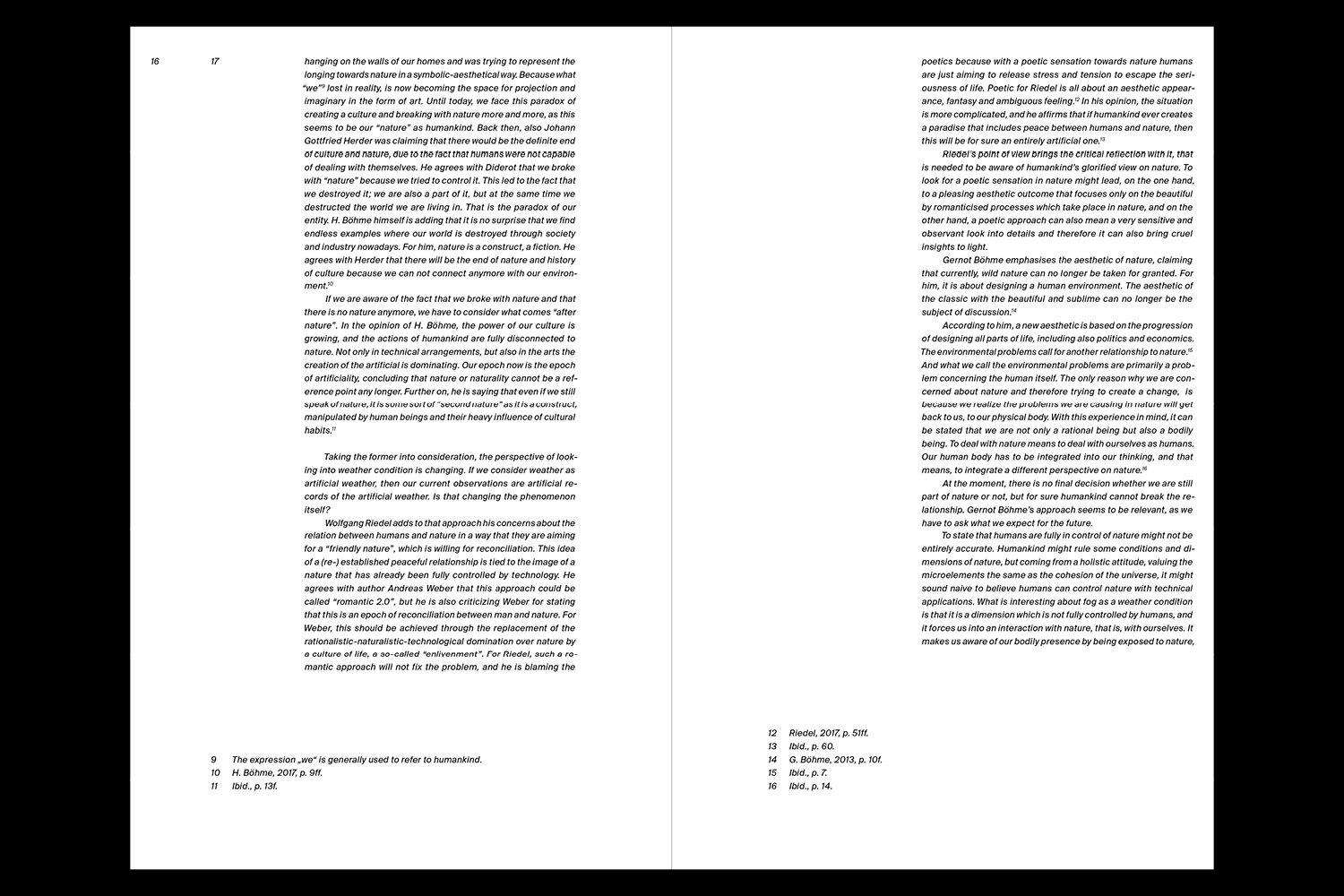 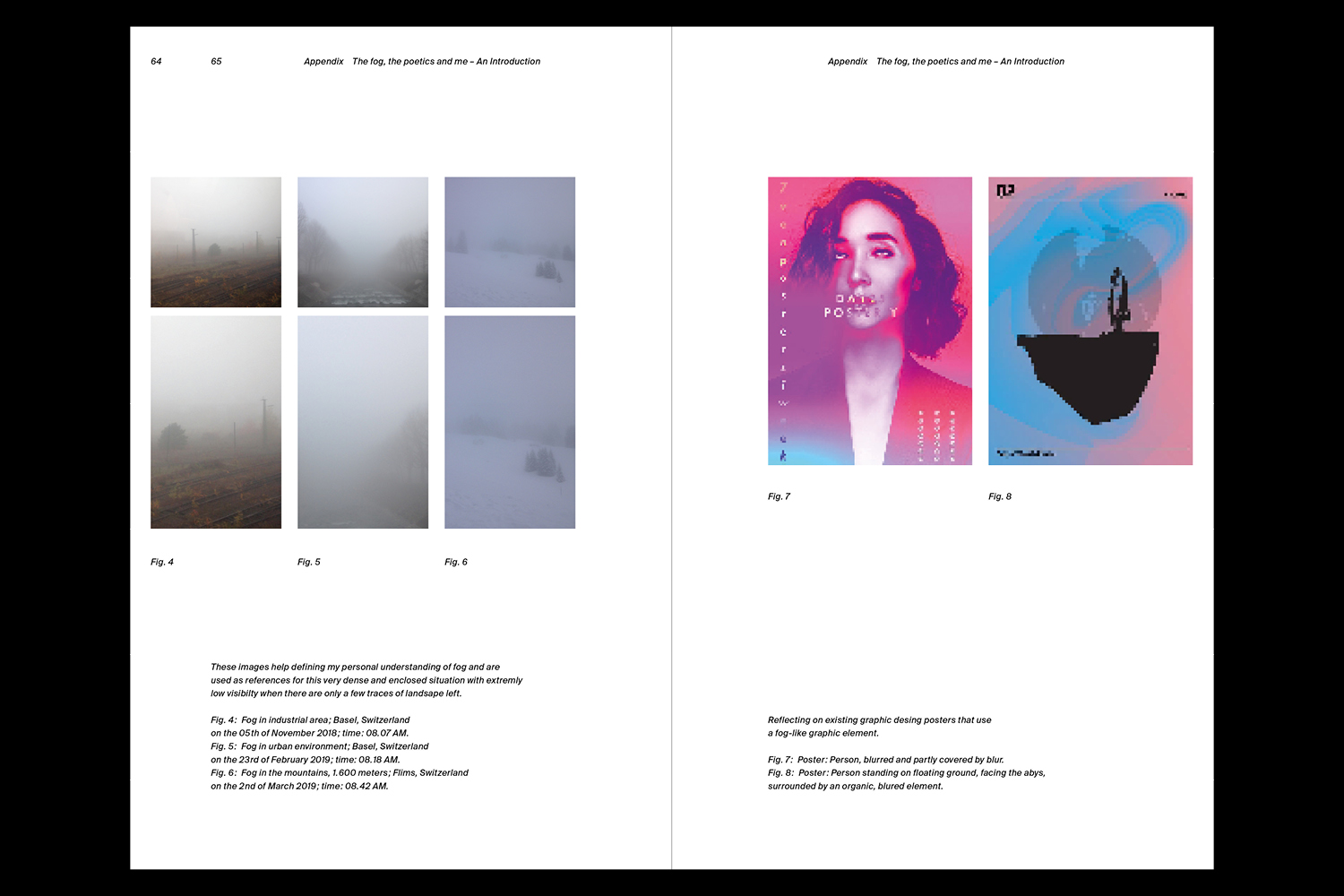 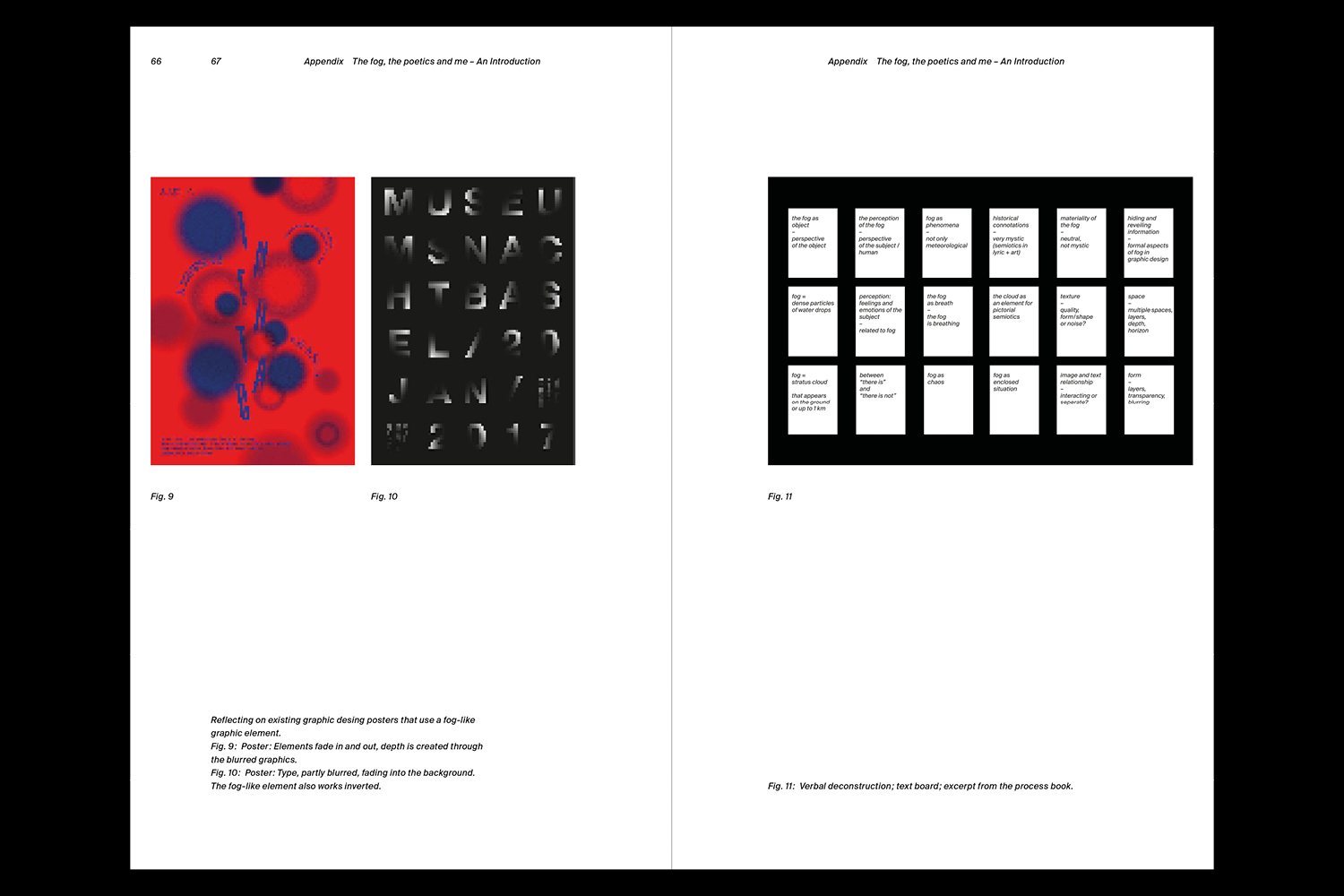